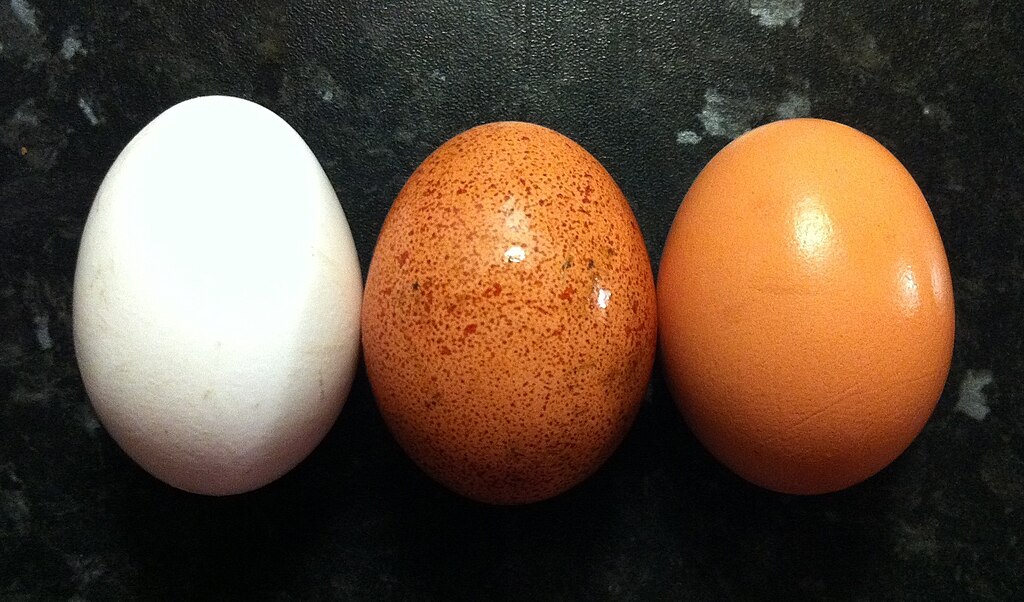 Omega-3 rich/fortified eggs are fine—but best of all, if you can get them, are farmyard eggs from hens that have been scratching around eating insects, worms, seeds, and greenery (like purslane). ~Paleo in a Nutshell p.48

Our Pleistocene forebears consumed all kinds of eggs: Ostrich, bustard, duck, and anything else they could find. Hen's eggs come close, with a proviso— seek out eggs that are rich in omega-3 oils, and it is preferable if they are also free-range and organic. Duck, turkey, quail, and goose eggs are good, too. Industrially produced eggs are a poor substitute and should not be consumed on a regular basis. ~Paleo in a Nutshell p.70

Omega-3-rich, free-range eggs any style are fine to start the day. Make a hearty vegetable-filled omelet or grill some tomatoes and mushrooms to go with the eggs. Don't forget that plant food should form the major part of the meal, and no backsliding— definitely no bread. ~Paleo in a Nutshell p.87

In our African Pleistocene past, our ancestors did indeed have fire, but they had no way to boil water. They generally ate plant food raw, although they often roasted tubers and sometimes roasted nuts and other materials. Animal matter, according to convenience, type, and body part, was eaten raw or roasted. Eggs were also eaten raw. ~Paleo in a Nutshell p.91

Of course, many people bring up their children successfully as vegetarians. However, staying with the Savanna Model, fish and fowl are fine. Free-range, omega-3-rich eggs are always good in any quantity. Just remember, you don't have to give your child anything that, as a Bond Effect practitioner, you would not eat yourself. ~Paleo in a Nutshell p.106

The women also collect eggs of all kinds and capture small animals such as locusts, caterpillars, grubs, toads, tortoises, and snakes. Ostrich eggs are particularly valued. The contents supply a good portion of food, the shells make containers for water, and bits of shell are carved into beads. ~Deadly Harvest p.15

Total animal matter consumption (that is, game animals plus eggs and all the gathered and fished animals) is no more than around 8 ounces (225 g) per person per day. Plant food is about 2 pounds (900 g) per day. This weight of food is rather less than even the San would like to be eating ~Deadly Harvest p.17

Several studies have examined the effort compared to the benefit for various feeding patterns. Not surprisingly, they find that, overall, it requires the least effort to collect foodstuffs that stay still or only move very slowly. Therefore, plants of all kinds, eggs, and slow-moving animals provide the vast bulk of the diet. In addition, foods that require little or no processing are given top priority. As we saw, the Aboriginal only ate grass seed as a last resort; it was just too time-consuming and tedious. ~Deadly Harvest p.23

Eggs formed a regular part of our ancestors' diet whenever they could find them. Of course, they were not restricted in the species of bird— anything from guinea fowl eggs to ostrich eggs would do just fine. Being in the tropics, the seasons did not vary much throughout the year, so there was usually the egg of some bird or another available most of the time for the San. ~Deadly Harvest p.61

The first farmers had to go looking for wild eggs. The Fertile Crescent is outside the tropics (it is about the same latitude as Washington, D.C.) and mostly eggs only came along in spring. It was not until chickens were domesticated that eggs were "farmed": wherever the chicken arrived, the hen's egg arrived too. ~Deadly Harvest p.61

The gathering of wild eggs today is greatly restricted by government regulation in most developed countries. However, the eggs of many species are available in small quantities as a by-product of the management of game birds. In this way, eggs from quail, pigeons, gulls, lapwings, plovers, pheasants, and ostriches are available to culinary enthusiasts. ~Deadly Harvest p.62

Dr. Artemis Simopoulos of the Center for Genetics, Nutrition, and Health, in Washington, D.C., is one of the foremost advocates of the need to incorporate omega-3 oils in the human diet. He observes that "on the Ampelistra farm in Greece, purslane is plentiful and grows wild; the chickens make a feast of it, along with insects and lots of fresh green grass, supplemented with fresh and dried figs, barley flour, and small amounts of corn. . . . As we expected, the eggs contained substantial amounts of omega-3 fatty acids."38 The Greek egg had an omega-6 to omega-3 ratio of 1.3 to 1, whereas a supermarket egg has a ratio of almost 20 to 1. The point is that many animal products have become unhealthy because the feed given to the animal bears no resemblance to the natural feeding pattern of the creature. As a result, the flesh and eggs are devoid of omega-3 oils. ~Deadly Harvest p.129

The food industry should correct this imbalance. One of the secrets to the Greek free-range egg is the omega-3-rich purslane that the chickens were eating. Now some egg farmers are producing omega-3 rich eggs by feeding the chicken on flaxseed, which is itself rich in omega-3s. ~Deadly Harvest p.129

Eggs Any Style. Omega-3-rich, free-range eggs any style are fine to start the day. Make a hearty vegetable-filled omelet or grill some tomatoes and mushrooms with eggs any style. Don't forget that plant food should form the major part of the meal, and no backsliding— definitely no bread. ~Deadly Harvest p.161