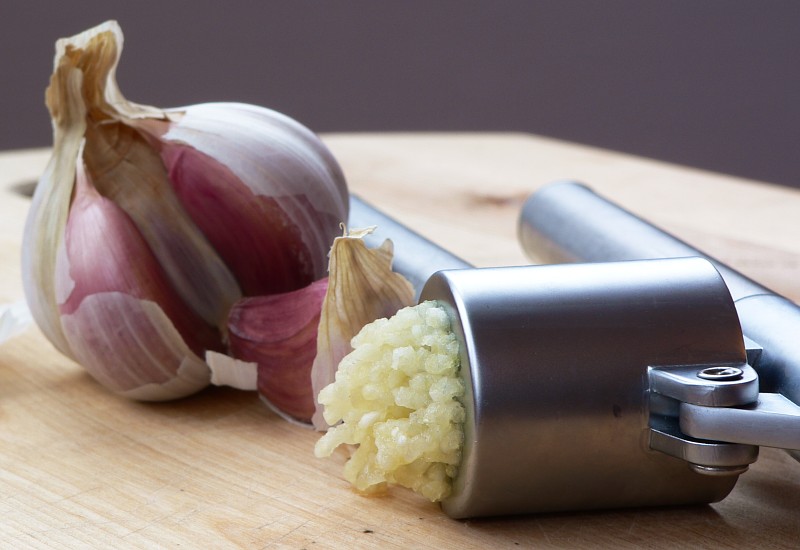 Garlic is a Green food. Green foods are safe to eat as a regular part of a diet.

Not everyone realizes that garlic salt is plain salt with garlic flavoring; regular stock cubes are over 50 percent salt; soy sauce is just liquid salt fermented with soybeans. ~Paleo in a Nutshell p.76

Try this quick (five-minute) method of cooking vegetables. Put a quarter-inch of water into a saucepan with a sliced clove of garlic and a bay leaf (or a pinch of oregano). Add a tablespoon of canola oil. The boiling water forms an emulsion with the oil. Add vegetables (fresh or frozen). Heat moderately with the cover on, but stir frequently, too. The vegetables cook fast, partly by boiling and partly by steaming. At the end, when the vegetables are close to done, heat vigorously and stir continuously until all the water has gone. They will be a beautiful golden brown when the water has evaporated. Always use plenty of herbs. As many vegetables soak up oil, this method greatly reduces the quantity of oil absorbed. ~Paleo in a Nutshell p.88

For dinner, a (...) stir-fry can be ready frozen; season with garlic, lemon juice, and herbs. Note that we are escaping the tyranny of the "starter, main course, and dessert" regimen. Instead, it's just the one course. As ever, try to eat the vegetables before anything else. A glass of dry wine is okay, too. ~Paleo in a Nutshell p.89